People often ask me the origin of our frog logo. “Jeremiah” was inspired by the Three Dog Night classic “Joy to the World”:

Jeremiah was a bullfrog

Was a good friend of mine

But I helped him drink his wine

Yes he always had some mighty fine wine…

1986
In December of 1986 my father, Earl Pagliaro, purchased the building at 1206 North Union Street which was the site of Wilmington’s first and longest existing bowling alley in the city. The original “Parkway Bowling Alley” lanes are still visible in the beer room and stock area of my shop. The gutters have been filled in with poured concrete, the gloss has long faded since the days that my grandfather, Alfredo Pannaccione, bowled these lanes winning many trophies in top regional tournaments… many of which I have on display at the shop!

1987
In March of 1987 after 3 semesters of arduous work preparing for my future, I took a leave of absence from St. Joseph’s University in Philadelphia. At the ripe age of 19 my parents asked me if I wanted to take off a semester to experience what the retail business was like. I figured if it wasn’t for me I could always return to St. Joe’s in September and continue with my degree. Do I really want to follow in my father’s footsteps? I decided to take the plunge. My college buddies presented me with their own version of a diploma stating that I successfully graduated with the knowledge of “moderate consumption of alcohol” or MCA with a doctorate in “gravity”, A.K.A. beer funnels! And to think it only took me a year and a half to find out how amazing the wine/beer/liquor industry could be… guess college can do that to you… great work-study program! My father is a great mentor and I feel so incredibly fortunate to have had the opportunity “take a year off” and dive into “Frank’s Union Liquor Mart”.

1995
In August of 1995 “Frank’s Union Wine Mart” was on the cutting edge of the liquor industry becoming the first wine merchant on the East coast to build a walk-in cigar humidor inside a wine shop. This addition has far exceeded my goals and expectations both in sales and popularity. Aside from my monthly wine dinners which I host featuring wine importers and wine makers, I now have at least 3 cigar and wine dinners a year. Much to my surprise as many women as men attend these fun-filled evenings! “(Note: In 2003 I switched off the humidor for good as a result of the diminishing fad of women puffing away, and Governor Ruth Ann Minner signing the indoor smoking ban in Delaware. In early 2004 I’ll introduce the addition of “Frank’s @Home Wine Sellers”….a full service Home Wine Cellar consulting and constructing partnership with IWA Catalogue. I’ll be converting the cigar humidor into an 11-foot by 22-foot walk-in, temperature-controlled wine cellar to house my high-end wines. This will be the showroom showpiece for what can be designed in private homes!”)

Frank joins former rival Jonathan Newman, – former Chairman of the Pennsylvania Liquor Control Board – to bring back his stellar Chairman Selections and offer them to Tri-state area wine lovers! Introduction of “Frank’s Xchairman Selections” brings upon a lawsuit from the PLCB forcing Frank’s Union Wine Mart to change the name to “Frank’s Xselections”… read article.

2011
In celebration of our 25th year in business we finally moved our offices and did some needed remodeling.

After 25 years of working in a crummy, drafty, windowless office we’ve finally imploded that sucka! Over the last few months you’ve seen some changes at the shop, and there’s more to come. Upon entering you’ll notice a huge opening to your left which is where our offices and receiving/warehousing were located… that new room houses our CLUBVino Tasting Area, MORE Xselections, our 33% Off End of Bin WALL and our $99 Mystery Cases!

And yes – sad to say – the dark purple paint with yellow splatters in the stock room is now only a memory. To bring back the original heritage of the building we were able to REVIVE several of the 65 year old bowling alley lanes of the Parkway Bowling Alley where my Grandfather Alfredo Panaccione spent much of his spare time. They’re absolutely beautiful

We’ve got NEW Xselections from top producers around the world at these Discounts:
20% Off by the Bottle
33% Off any 6 Bottles
50% Off any 12 Bottles!

FranksWineXselections started back in 2008 when I teamed up with former Chairman of the PLBC – Jonathan Newman. While we still feature Newman’s great finds we’ve also expanded our Xselections to include other stellar wines that you know and love.

2020
Oh boy… 2020… what a shit-show! Where do we even start with the crazy vintage that so many were so excited to jump into – the return of the Gatsby-era! January was spectacular – I married a wonderful woman on the 11th of the month – Colleen:-) Well… Covid-19 had another plan for us all. Fortunately enough FranksWine was deemed an essential business by Governor John Carney. Our business in March – April – May were like Christmas weeks. It was insane. I worked 42 days straight from open to close, expanded our hours and my beautiful wife started a program to help our out-of-work industry friends. In the 10 weeks that the pandemic forced restaurants to close in Delaware Colleen’s program raised over $19,000.00 for bartenders, servers, chefs, hostesses, etc who all very suddenly became unemployed.

I’m sure I’ll add to this before the year is out… but for now let’s leave it at “FranksWine” is here to stay for a very long long time. 34 years and counting!

Fun-filled is the best hyphenated word which describes the wine industry!… and the people make it that way. History is still in the making here at FranksWine, and I’m sure it will continue to be just as fun-filled as it is now. I’ll make sure to keep it that way! 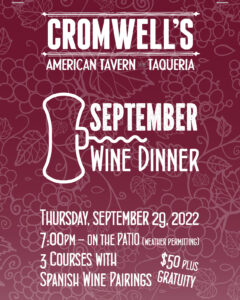