Sometime You Just Have to Hit the Pause Button  ||

Six months ago my wife Colleen and I picked a date of June 1 to reassess our business/home life balance. We spent a good part of Sunday talking about where our priorities lie and what changes should be made to have a more balanced life. During Covid our business exploded because you guys all really like to drink… especially behind your computer screens while you were working from home and home schooling your kids.

Since April 20, 2020 FranksWine has hosted our Alfresco Patio Tastings each and every Wednesday giving the community a respite during a time when many of you were going batshit crazy stuck inside your homes. Every Wednesday the FranksWine Crew pulled out tables and chairs and umbrellas and arranged for Live Music and a Food Truck, called upon our vendors to supply libations to keep you happy and to support a different charity each week.

After hosting our 109th Alfresco Patio Tasting last Wednesday and raising over $200,000 for charities in 25 months we have decided to take a break.

As you can imagine the day-of setup and breakdown is very taxing week in and week out. The daily calls and emails and texts every week from our vendors, musicians, food truck chefs, charity organizers, and volunteers is starting to take a toll on the daily everyday business needs at FranksWine especially in the middle of our ridiculously busy wedding season. More importantly it’s taking away from the time I could be spending with my family at home.

Something’s gotta give. The constant organized chaos needs to settle before things start slipping; The Energizer Bunny in me needs to chill out and refocus. Effective immediately and with heavy heart all of our upcoming scheduled Alfresco Patio Tastings on Wednesdays are cancelled.

I know I will be greatly disappointing the many organizers of charities, dozens of musicians, the talented chefs, our neighbors and friends who have made reservations, and industry suppliers… and for that I apologize.

On the flipside I am looking forward to having breakfast with my Mom and Dad Wednesday morning. While I’m driving there I’ll take the time to call my kids – Amelia and Olivia – in NYC and wish them a happy day. On Wednesday at the shop I look forward to paying more attention to the needs of my hard-working and dedicated crew. On Wednesday afternoon when my wife calls to check in I look forward to actually listening to her instead of saying “hey, I gotta go”. On Wednesday night June 1st I look forward to leaving the shop at 5 PM and going straight home to pick up Colleen and my bonus kids – Bryce and Addy – and hang out at the pool that we belong to. I’m even going to make time next week to visit my college friend Mark who had a scary-ass surgery a month ago and I’ve been too “busy” to see him.

From the bottom of my heart I thank each and every patron – all 11,560 of you! – Who have sat in our parking lot to support the FranksWine Alfresco Patio Tastings. So much good came out of our weekly efforts…

Besides the money raised for charity, how about the countless number of new friends that we made over the last two years; The band members, the chefs, our local – and traveling – vendors, the countless volunteers from all the charities, and especially these awesome patrons that we hand-picked from our weekly patio tastings to join the FranksWine Crew: Brenda, John, Laurie, Liana, Nicole, Paige, and Teresa! I also thank our City, County, and State officials for cooperating every week to make our events happen.

We will continue to host occasional events on a much larger scale… NEXT UP: Our Last Hurrah !! Multiple bands, multiple food trucks, multiple charities, lots of libations… Date TBD! Thank you again for your continued support.

Much love and CHEERS! 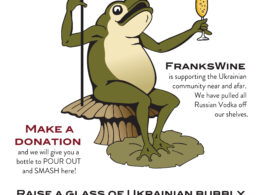 FranksWine is supporting the Ukrainian community near and afar. We have pulled all Russian Vodka off our shelves. Raise a glass of Ukrainian bubbly in solidarity with the brave people of Ukraine during this difficult time FranksWine is donating $5.00 for every bottle of Bomon Angel Shamp to the Ukrainian Orthodox Church of USA who will get the funds to those in need. www.uocofusa.org

AND we still have some Stoli left in the shop and we want it out of here! Make a $10 donation and we will give you a bottle of Stoli to pour out and smash while you’re here on North Union Street!

Some Interesting Articles on the Russia Invasion Effect:

Thank you Rick Jensen of WDEL for clarifying the Stoli Vodka dilemma of Russia vs Latvia. Listen to the podcast: https://post.futurimedia.com/wdel/playlist/78/listen-5498.html

A week ago no one ever questioned the origin of Stoli – 100% of you knew it was from Russia. When the company moved its operations to Latvia, they never informed/educated our industry for a reason: because they wanted everyone to still believe it was Russian!

In a few week you all will be drinking a pint of Guinness thinking you’re enjoying a true Irish Stout… hey pssst … it’s brewed in Canada eh!

It’s all about brand identity, association and perception… bottom line: your hear Stoli, you think Russia! So, here on North Union Street FranksWine will continue to encourage you to POUR OUT & SMASH bottles to raise funds for the people of Ukraine

Check out this NBC 10 Philadelphia article:

Many of our long time customers will remember that ten years ago on Valentine’s Day, this AssClown walked into FranksWine to find a nice bottle of wine for his sweetheart. Donning a red Phillies hat and grey hoodie, we greeted him as he entered the shop and strolled into the wine room.

Usually we’ll give folks a few minutes to browse before we ask if they need help, but this classy wine aficionado had already picked out a bottle of Tuck Beckstoffer 2009 Est 75 Cabernet Sauvignon… nice selection, Mr. Assclown!

He proceeded to the counter with the bottle in his hand.  Scott and I were both occupied with other customers at the time and we were not near the check-out counter.  Mr. AssClown waits impatiently for about 20 seconds, but decides that was too long… so he walks out with his girl’s gift!

How romantic. He didn’t even stick around for his free Valentine’s Day gift wrap.  Scott followed him out only to see him hurriedly pulling out of the lot in his shiny white Volvo SUV.

This obviously irked the hell out of us especially after reviewing the surveillance video.  Hmmm, what to do?  Well,  I posted a picture of Mr AssClown on Facebook and within 24 hours it was LIKED by 640 friends, hilariously commented on by 660 and passionately shared by 46 AND the story was picked up by DelawareOnline.com where 195 others shared it from that site.  This guy is certainly getting around town!

Impressed and amused by everyone’s interest I pulled out my iPhone the next morning and made a video and posted it to YouTube which so far has been viewed by 2,856 people… oh boy!  I’m sure that number will double by the end of this week!

So, what about Mr. AssClown ‘s wine of choice?  How is it?  I popped a bottle in his honor that Saturday night… glad he has good taste in wine!

So good in fact that I decided to buy a bunch of it and slap a nice discount on it.  The Tuck Beckstoffer 2009 Est 75 Cabernet Sauvignon was our featured wine for the week… we planned to have Mr. AssClown at the shop pouring it that whole weekend!

But alas, it was not to be.

I withdrew my bounty.  At this point, I just want to meet Mr. AssClown, shake his hand, and thank him for all the great exposure and fun we’ve had at his expense

AssClown is still out on the lamb.  There’s not a week that has gone by without someone asking me “Hey Frank, you ever catch that AssClown?”

At that years Frank’s Golden Wine Event we even had a name tag made up for Mr. AssClown in anticipation of him accepting my invitation and 2 complimentary tickets to our sold out event… he was a now show.

I’m sure you’ve seen our gift note bottle tags in our shop, but have your seen this one?!  Good friend Anne Riley of North Star Design

Here’s a clever graphic that Stephen Webb, now retired from ZZHouse Design Studio in Newark, created.  He also made up a stack of 8 1/2″ x 11″ stickers of this image which started popping up on telephone poles all around New Castle County… oh my.

It still blows me away that with the tens of thousands of impressions of Mr. AssClown this past decade that NO ONE knows who he is.

Memo to Mr. AssClown:  if you’re that good about hiding and withholding your identity why settle with a $25 bottle of wine?  You’ve got it in you to be a great Mob Boss and go underground.  Yup… a true AssClown!

I have defaced over 5000 bottles of Tuck Beckstoffer Est 75 Cabernet Sauvignon this past decade and I’m still at it.

If you haven’t tasted this wine do yourself a favor… Mr. AssClown knows his reds!

The 2019 is a blend of vineyards from Lake and Napa Counties. Beckstoffer finds these diverse, high quality vineyards to compliment one another perfectly. The high altitude rocky vineyard sites in Lake County deliver angularity, complexity and austerity while the Napa Valley fruit provides deep concentration and focus.

This wine is dense and tremendously focused, with a wonderful nose and palate of cedar, blueberry, saddle leather and white pepper. The finish showcases a perfect balance of acid, tannin and sweet toasted oak. Meticulous, detail oriented winemaking and complete attention to detail has produced a wine of tremendous presence and complexity that must be tasted to be believed… just ask Mr. AssClown !